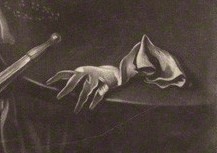 So many reenactresses wear fingerless mitts. Like pretty much everyone I know. Living in New England, why are we freezing our fingertips off? Can't we wear gloves?


Last spring when I was researching local staymakers I noticed this ad promoting gloves... 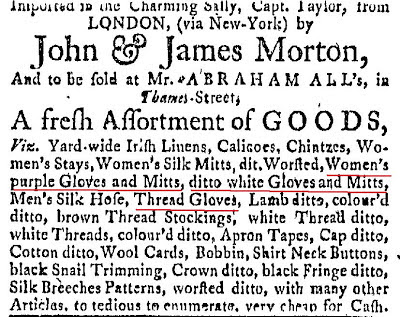 Purple gloves? Yes! Digging deeper in the newspaper archives, the Mortons were not the only merchants in town selling "gloves"... 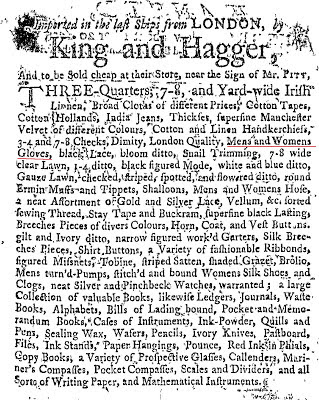 King and Hagger promote "Mens and Womens Gloves" in the Newport Mercury on May 22, 1759. 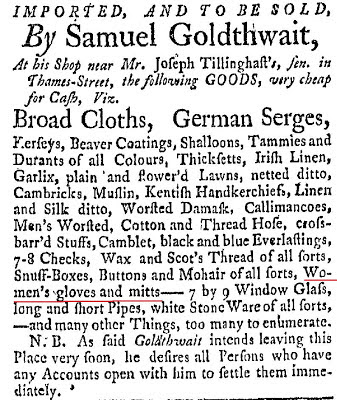 Mr. Goldthwait promoted his "women's gloves and mitts" in this July 11, 1763 ad in the Newport Mercury.

Near and dear to my heart, the Wanton brothers advertised selling "Men's and women's lamb glaz'd gloves" in the Newport Mercury on October 22, 1764. (This is the father and uncle of the young woman I often portray.)

This is just a selection of ads, there are many, many more. So is the 18th century idea of "gloves" the same as our modern idea? Am I missing some secret reason why no one wears gloves? I've found a few prints to help answer this... 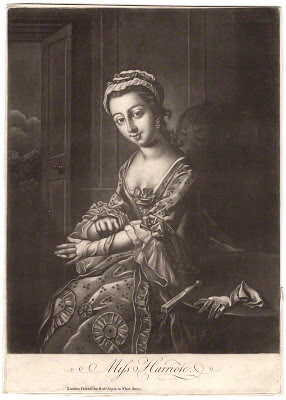 Miss Harriote, mid 18th century
National Portrait Gallery UK, Accession Number NPG D2573
One glove on the chair and she's putting the other on. Looks relatively comparable to a modern glove. Note: the seam around her left thumb.

An English Man of War taking a French Privateer, 1781
The British Museum Accession Number 1935,0522.1.66
Green gloves! No evidence of buttons on the inside of her wrist. I have not yet had a chance to explore museum databases to see if there are any extant gloves, but it seems safe to conclude that we are under representing gloves in our living history work. I hope to make / buy a pair this year once the furlow / sequestration situation is resolved.