So Not 18th Century? 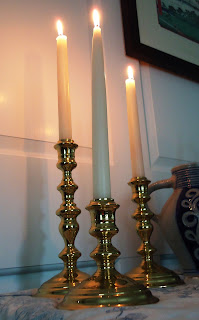 Remember that hurricane last week? I lost electricity for a day and a half. (It was bad but could have been much worse.) Here are some reflections written when I was semi in the dark...


---------
I have a confession. Thanks to Miss Irene I've come to the conclusion that--when it comes down to it--I might very well be So Not 18th Century. It's 4PM on Sunday. I've been without power for six hours--a personal record. In four hours it will be dark and I don't know what I'm going to do. It will be too dark to sew or read. Can't watch the latest Gordon Ramsey show. Agh!?! Which makes me presume that I couldn't cut it as a colonist.

Tis a day that is more in keeping with March or the winter for the wind is terribly strong. There has been rain but tis not a storm. Many branches have fall from trees and a walk to the harbor shews the water's waves to also feel the heavy winds.


I must confess, I am glad for the lack of sun and this cool wind. for during these late summer months I oft long for the stark cold of winter.

It's true. Hurricane Irene hasn't brought my island in Southern New England a lot of rain. It's the wind that's proving problematic. The whole island lost electricity due to a tree that fell on a power line. We're trying to eat everything from the fridge but most will be wasted.

I feel lost without the breaking news. I can't visually follow Hurricane Irene's path up the East Coast. I can't follow everyone's facebook updates and learn how the storm is affecting them.

How did colonists manage receiving news so slowly?

I have limited cell phone coverage. I can text my sister who lives downtown, feet from the flood zone. She's drinking strawberry milk. I can text my mom vacationing in Florida. She's shopping for my baby's upcoming birthday. Yet I still worry about my loved ones.

How did colonists handle not hearing from family for weeks / months at a time?

On the other hand, maybe it wouldn't have been that bad. If this storm had hit in the 18th century I wouldn't have known it was coming. I wouldn't have spent days in advance worrying about it or preparing for it. This would just be another gloomy Sunday.