On a recent rainy Wednesday, I felt the itch to go antiquing (much inspired by my friend from Picking for Pleasure and seeing pictures on facebook of treasures another friend had found). I packed up my munchkin--this was my toddler's first time antiquing--and we headed out.

Hanging on a far back wall of my favorite little corner shop was a framed print. But not just any framed print. A print that claimed to be 18th century. And it cost $30!

I didn't believe it at first. Upon close inspection, the faded handwriting definitely looks 18th (or maybe early 19th) century... 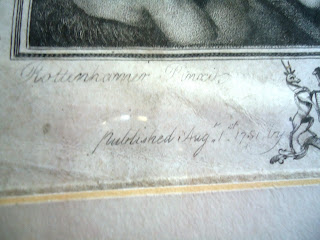 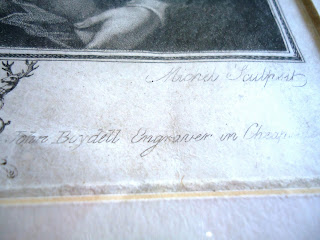 ...an engraver in Cheapside.
The style of the handwriting and the date seem strong enough evidence that it really is the kind of bargain that antiquers seek. Of course I bought it (I've dubbed my toddler my good luck charm), and I'm curious about its history.


Who is (was) John Boydell?
Where exactly is Cheapside?

I know that Cheapside is an area of London, which inspired some research to uncover what it was like in the 18th century.
Liza Picard, in her book Dr. Johnson's London: Everyday Life in London 1740-1770, paints a broad picture,
"We shall begin at Temple Bar, built by [Christopher] Wren in 1672 at the western boundry of the City, where the strand becomes Fleet Street...This part of the city escaped the Great Fire of 1666. Its medieval timber houses wildly overdecorated just for our pure Georgian taste, overhang the street and lean on each other for support. Dr. Johnson lives in a back street tucked away on the left. Ahead of us up Ludgate Hill sits St. Paul's Cathedral, which is darkening from smoke pollution. Beyond is Cheapside, a main shopping area" (p5).

A quick search in the Museum of London's collections reveals a few items with Cheapside connections...

An earthenware bowl found near Cheapside at the site of an 18th century coffeehouse. 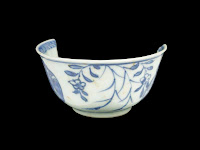 Tea Bowl, 1721-1745
Museum of London Accession Number 25316
A tea bowl also found at the site of an 18th century coffeehouse near Cheapside. 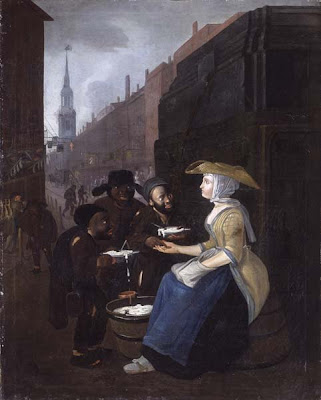 The Curds and Whey Seller, Cheapside
Oil on Canvas c.1730
Museum of London Accession Number 82.338
The museum's description reads, "This painting by an unknown artist shows a blind woman selling curds and whey on Cheapside. A large proportion of London street vendors were female, often migrants from the countryside. Curds and whey were a popular foodstuff made from milk. They were a cheap source of nutrition for poor Londoners and were sold widely on the streets."

The book London 1753, by Sheila O'Connell, (published to accompany an exhibit celebrating the 250th birthday of the British Museum) describes the city as, "a nation of shopkeepers". The book includes an engraving featuring Cheapside in 1762-3 by Thomas Bowles (p60). (Unfortunately I can't find it on the British Museum's online database.) The description for the image reads,

"Cheapside was London's major shopping street from the twelfth century onwards; its name comes from the Old English word for market. By the 18th century its many shops concentrated on the sale of luxury goods" (p60).


O'Connell shares that in 1766 prints were considered, "curious and entertaining," they "were acquired for thier own sake, a luxury commodity product for an increasingly prosperous population" (p43).
She continues and references John Boydell, the engraver attributed to my print...

"In 1763 John Boydell began to issue A Collection of Prints, Engraved from the most Capital Paintings in England published serially over the next twenty years...The overseas market for British prints - and with them British painting - expanded under Boydell's entrepreneurial lead. By the end of the 18th century London prints had come to dominate the European art world. They were no longer images of the city and its people produced for a domestic market, but works of art on the international stage" (p43).


So perhaps this print was originally purchased as a luxury item? And maybe it was imported in the 18th century and sold in the seaport where I live, which was then in its Golden Age.

Some interesting Boydell portrait prints I found while quickly scanning their database are... 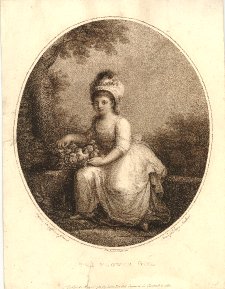 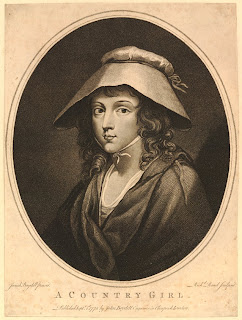 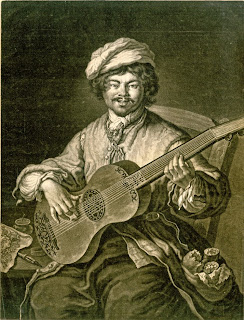 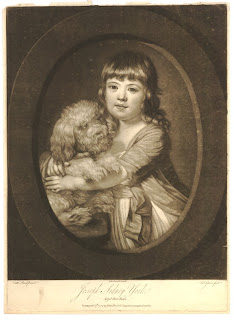 Joseph Sidney York Aged three Years, 1772
British Museum Accession Number 1877,0811.815
There are so many Boydell prints, it's almost overwhelming. Amazon.com even sells a 2004 book about his Shakespeare prints, Boydell's Shakespeare Prints: 90 Engravings (Dover Publishing). Surely Mr. Boydell's work deserves dissertation level research, for there is much to learn about this influential engraver and his haunting ground.