My new needlework bag is almost ready to go but it needs accessories so I pulled the following from my collection to complete it... 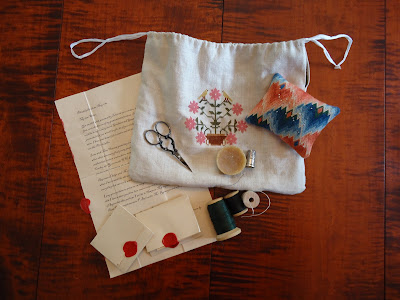 2) Repro thimble. It's not 18th century...it's from the Hampton Court Palace gift store and features a Tudor Rose but it's less shiny than a modern thimble so it looks fairly appropriate. If you operate under the concept that "Kit can wear Felicity's clothes but Felicity can't wear Kit's clothes" it works.

3) Clump of wax for thread.

4) A few wooden spools of thread that I stole from my mom's sewing box many, many years ago.

5) Embroidery scissors by Ginger c.2003. I'm not sure if Ginger still manufactures this style but it's the closest I've found to an 18th century needlewoman's scissors.

6) Lastly, "letters" from the brother of the young woman I interpret. To create these I typed a few letters into Word, used the Blackadder ITC font and made the margin fairly thin. I printed them on light beige paper, folded them into little squares and closed them with red wax and a fleur de lise seal.

a) This paper isn't the right weight--it's standard printing paper. I know 18th century paper was made with linen but I can't find modern paper of that quality without a watermark.

b) The wax is cheap. If you don't use enough you can see through it. It's the $5 kind from the bridal aisle at Michael's so that's to be expected.

c) I may be stretching it with the fleur de lise seal but, given that some of the letters are in French, I felt at liberty to use it for now. 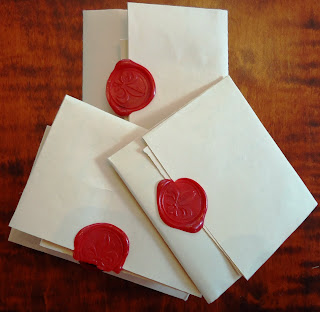