A Fan For All Seasons 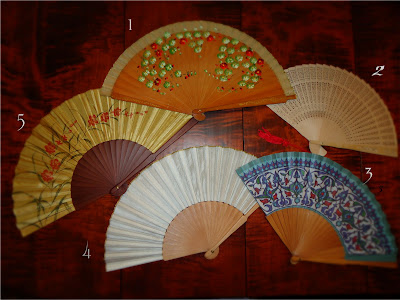 With the warmer weather around the corner, I was inspired to celebrate spring by dusting off my small fan collection and reviewing what--if anything--is accurate for 18th century living history.

1.  This $10 wood paneled fan has a one inch strip of fabric (probably a polyester-linen blend) across the top and is hand painted with flowers. It opens easily and creates a good breeze.

My research of online collections has not yielded an English example with a floral pattern that validates this fan for living history. I read on The Met's website that, "Eighteenth century fans have a sense of authenticity to them because they often depict contemporaneous life." And clearly this example falls short. The brush strokes that compose the flowers are more mimetic of Monet's work, not a Gainsborough-inspired scene. However this solid fan's durability and its ease of opening / closing inspires me to browse Chinatown shops (I purchased it in the China pavilion at EPCOT) to find something that can be adapted for 18th century living history.

2. This common reproduction fan is quite possibly the most accurate of the lot, but the style that lends it the best authenticity leads it to produce the least amount of breeze. I believe this style is made in the likeness of the Chinese brise fan as it has individual panels, which are seen in the following examples:

I also came across this c.1780 portrait of Lucy Skelton Gilliam (from Colonial Williamsburg's collections, accession number 2004-40,A&B) who appears to hold a brise fan.


My brise fan is smaller than Lucy's and has a red tassel at the bottom. Lucy, could you move your left hand so we can see if you have a ribbon at the fan's base? And while you're at it, could you stand up and show off that gorgeous gown? 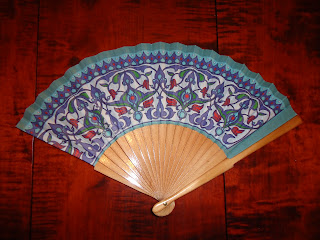 3. The fan on the left is a favorite that was purchased at the Louvre's gift shop (and is available at their online store). It reminds me a little of Delft tiles, though I later learned that it's inspired by tiles from Iznik in Turkey. My fan research has not (yet) yielded an example with a pattern that's close to this design so I don't feel  justified using it for living history purposes but I did come across this 18th century Italian fan that I love that's somewhat similar.

4. Purchased at the Fan Museum's gift store in Greenwich, England, I believe this white fabric fan is my second safest bet for living history...though it's made from duiponi silk which, I realize, it not accurate for the 18th century. (I'm hoping to have the courage to remove the fabric and replace it with an accurate silk some day.)

I found three primary sources for this:
a) Hogarth's 1735 print, A Rake's Progress Plate VIII. The woman in the background holds a fan in her right hand that does not look embellished.
b) Hogarth's 1736 print The Sleeping Congregation shows a woman in the foreground holding a non-embellished fan in her right hand as well.
c) And best of all there's this French fan from FanCollection.net.

5. Also purchased at the Fan Museum's gift store, this fabric fan falls into the category of #1. I don't think the floral design is accurate for the 18th century but it opens / closes nicely and offers a decent breeze. I did find this 1780 French fan at FanCollection.net that has a floral scene and does not show a landscape but I don't think it's close enough to use #5 for living history. 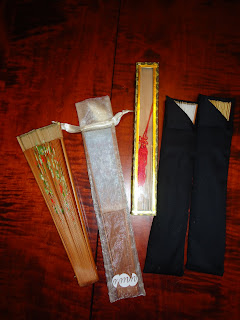