The last few weeks as I've been driving to / from work I've noticed a roadside weed that's sprouted like mad (it's seriously huge) and has bloomed a funny yellow flower. And I've noticed it almost everywhere. Having a new interest in gardening, I had to figure out what it is.

Thanks to Google Images, I determined that it's Common Mullein (verbascum thapsus). On a government website, I read that it was, "brought over from Europe by settlers, it was used as a medicinal herb, as a remedy for coughs and diarrhea and a respiratory stimulant for the lungs when smoked." I couldn't help but wonder if this weed has an 18th century connection?

After a bit of searching I learned that... 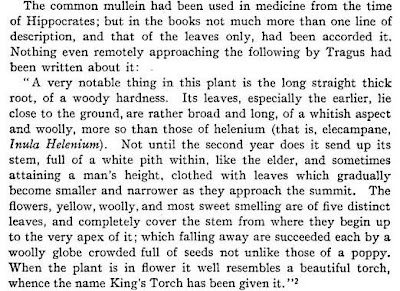 Common mullein is referenced in ancient Greek literature.
Landmarks of Botanical History: a Study of Certain Epochs in the Development of the Science of Botany, 1909

I guess that makes it an "heirloom" weed?
The Book of Field and Roadside: Open-Country Weeds, Trees and Wild Flowers of Eastern North America, 2003

A little lore.
The Book of Field and Roadside: Open-Country Weeds, Trees and Wild Flowers of Eastern North America, 2003 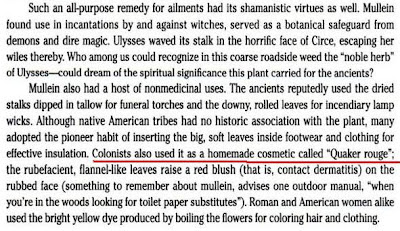 I like the idea of the "Quaker rouge" but I'm not sure I believe it.
The Book of Field and Roadside: Open-Country Weeds, Trees and Wild Flowers of Eastern North America, 2003

A primary source that proves it was actually here along the East Coast.
Travels Into North America: Containing Its Natural History, and a Circumstantial Account of its Plantations and Agricultural in General, etc. 1771 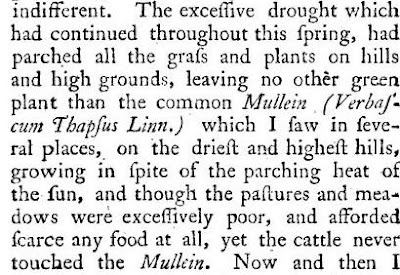 Travels Into North America: Containing Its Natural History, and a Circumstantial Account of its Plantations and Agricultural in General, etc. 1771

Here are a few photos of common mullein from the Rhode Island roadside... 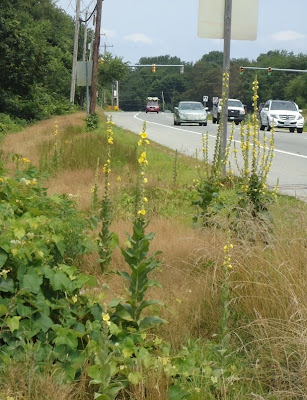 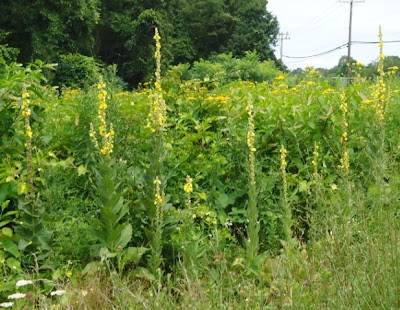 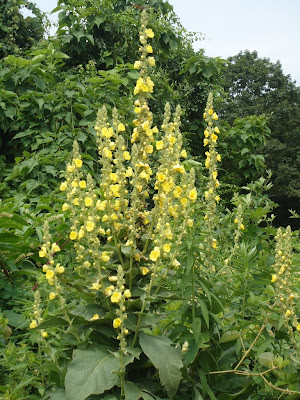 Excited about my discovery, I told my husband what I had learned and he said, "Ah that's not weird?" I don't think it's weird, I'm not going to make tea or dye clothes with it. This research further illustrates that the influences of the 18th century are all around us (as I've referenced in previous posts here and here). Have you noticed any common mullein in your area?