It's safe to say that my toddler's toys have taken over the house. Her love of play and playing is both a joy to watch and her job as she grows. Looking around our plastic collection of Fisher Price and Little Tykes I'm wondering what should I bring to living history events this year to keep her appropriately entertained?

Starting with my go-to resource for questions about 18th century daily life, Daily Life in 18th-Century England, author Kirstin Olsen writes, "Parents...bought toys for their children, including rattles, small tops called tetotums, dolls, wagons, and sports equipment. Children also made up their own amusements. They played hoops, trap-ball, and barley-break. Bad little girls called names and pulled off visitors' wigs; good little girls practiced milking the cow or 'dressed Babies [dolls], acted Visitings, learned to Dance and make Curtsies'" (p.55). She continues by explaining, "Play, in short, was one part mischief, one part organized game, and one part pretending to be an adult--in preparation for courtship, the marriage market, and founding a family of one's own."

Digging into primary sources, I found a few items of inspiration...

Baby Rattly from The Royal Collection, c.1762
Accession Number RCIN 11944
The description reads, "This silver filigree rattle was a gift to the infant Prince of Wales from his governess, Lady Charlotte Finch. It was subsequently used by all of George III’s children in the royal nursery." Unfortunately my daughter has grown out of the rattle stage. And I think this example is too formal for 18th century New England.

A quick search of the V&A's collections reveals several dozen examples of toy serving dishes, such as this toy coffee cup... 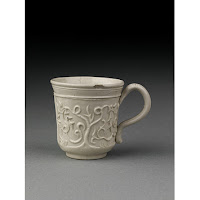 From Staffordshire, England. Made from salt-glazed stoneware.
Accession Number C.1244-1919
...and this toy tea set. 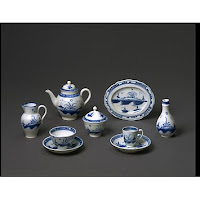 Toy teapot and cover, c.1780
English soft-paste porcelain painted with blue enamel.
Accession Number c.197&A-1921
While my toddler has taken a great interest in playing with her plastic kitchen toys and cooking pretend food for us to eat, she's too young to play with anything breakable like this.

It seems that we often find animals in children's portraits, such as birds or squirrels or dogs. 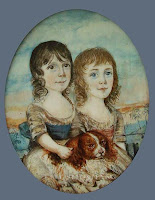 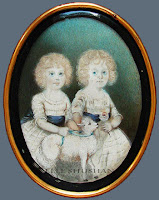 Twins Henry & Charles Tebay, at the age of one and a half years old,
by their mother Catherine Tebay, inscribed, signed and dated 1793.
Also from Philadelphia antiques dealer Elle Shushan Fine Miniature Portraits.
My little one is almost the same age as the Tebay twins...is it too much of a stretch for her to play with a stuffed animal, such as a sheep?

When it comes to real toys, Historical Folk Toys sells many kits and games and books, but most are too mature for her. (She still wants to taste many of her toys.) I also met a sutler last fall, Calf Pasture Woodworks, who sells wooden toys that might be good for her to play with in a few years.

As for toys she can use right now, Old Salem Museums & Gardens in South Carolina offers this set of leather balls ($20) that she could kick and throw and chase. 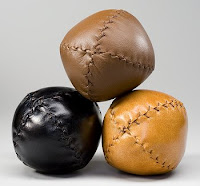 She has Plimoth Plantation's Poppet ($29), a colonial-looking rag doll. It's far from her favorite baby doll, but looks semi appropriate for our era.

My daughter plays with her "poppet" while toddling in her first pair of stays.
While there are always wooden spoons, I'd love to hear suggestions from others about toddler-friendly toys. The more goodies I can find, the better chance I'll have that she will extend her love of play into the world of living history. 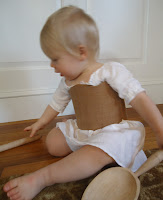